Kristen Lamb's recent blog post about writers not needing more than one blog was the final kick in the butt for me. I'd been thinking about this issue for a while now myself.

Writing blog posts is hard work and while I enjoy it most of the time, some days, even paring it down to once a week for each of my two blogs, it's pure torture.

Therefore, much as I've come to enjoy this blog, I'm going to stop posting here and use my old blog at http://homesteadnotes.blogspot.com/ as my one and only blog. I'll leave this blog up at least for another year or so, but I won't be updating it. My official writer's website is at http://teresarobeson.com but I'll continue blogging at the http://homesteadnotes.blogspot.com/ site for now.

As I was saying to a friend, time is the frenemy of busy folks. Time is, of course, our friend because I'd rather have it than not. ;) But it's also our enemy because it never gives us enough of itself and it's up to us to make the most of it.

See you on the Other Site!

Most people I know use goodreads. If you're one of the few people who is not familiar with it, you're totally missing out.

Goodreads is to books what Ravelry is to the fibre (yeah, I'm Canadian) arts community.

Goodreads is a community of readers and writers interacting and participating. You can use goodreads to keep track of your books, both read and to-be-read, categorize them on your virtual bookshelves by whatever ways make the most sense to you. You can give each book a rating out of 5 stars, and post reviews to share with the community.

Also within the community are different book clubs you can join. I'm not one for book clubs (ok, I really view them with as much pleasure as I view being infected by the plague, if you must know), but I think if I were forced at gun point to join a book club, I'd join one on goodreads because I can discuss books in my PJs without having to venture out of the house and drink whatever the heck I choose instead of whatever is served. Truly a fabulous option for a non-people person like me.

Another great thing about goodreads is that there are at any one time, hundreds of authors having giveaways of their books, some are even ARCs (advance reader copies)! I've won a book before. It was good too; I gave it to my son to hone his writing when I was done with it.

And if you join goodreads, pleeeease friend me! I love to see what others are reading even if it's a genre I have no interest in. I'm just a bibliovoyeur. Hey, I invented a word!

No, this is not a post about what a shame it is that some school systems have taken out cursive and penmanship from their elementary education curriculum.

It's another post about how language can be amusingly confusing.

This time, it's a sign on a donation box that makes my older son laugh hysterically every time we pass by: 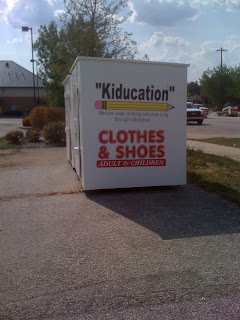 You'll have to click on the photo to enlarge it, but the slogan says, "We turn used clothing into new kids through education." As Son1 is fond of pointing out, that make no sense at all.

I mean, you can understand their gist, but, really, no matter what process you use, used clothing can never be turned into kids.

And while this sounds like a good cause, it's a bit sad (and ironic) that something that is supposed to involve education sounds like it's written by someone who has no education.

I wish I could credit the person from whom I found out about Write-On Con, but, hey, these days, I'm lucky if I remember my kids' names (all two of them) and the day of the week it is. I suspect it was one of my fellow Society of Children's Book Writers and Illustrator member buddies.

Last year, when I first found out about it, I was a lurker. A lazy lurker at that. I think I arrived late and didn't really try to figure out how it works.

In the interim, I completely forgot about it because that's just how my brain rolls...or doesn't roll. My brain is quite the expert on gathering moss in my old age.

Fast forward a year. I got a notice that Write-On Con was about to start again  - fortunately for me, I had the foresight to sign up for their email notifications last year (I suspect my good twin Skippy did me the favor*).

I still am trying to figure out exactly how Write-On Con works, but I have to tell ya I learned a lot from the live and forum events which featured editors and agents, and other helpful writers.

Because I have only a picture book manuscript completed so far this year, I participated in the PB query forum. While critiquing 15 or so - I lost count - of other people's queries was time-consuming, it was also a terrific learning experience. I think my critiques improved after about the 5th one. I also realized that the accumulation of writing knowledge for the past 20 years or so actually stuck in my brain, so that even though I can't remember where I read certain facts from, I could tell others about these facts.

While no Ninja Agent asked to see my manuscript, some kind person gave my query 5 stars. [And then I, embarrassingly, asked @writeoncon what stars meant...duh.] Thank you, kind fellow writer! Your rating kept me from believing that my writing sucks so badly no agent/editor deemed the query worth looking at.

So, if you write children's literature, I highly recommend checking out Write-On Con's archives and then participating next year. It's all free, though I always donate, even last year when I had no idea what was going on. Having been a long time volunteer in various capacities, I usually believe that volunteers should be rewarded somehow. :)

Maybe I'll see you at Write-On Con next year?

*I have no twin, good or evil.

To flatter or to complete, that is the question

I read something recently in an e-newsletter that made me giggle. The headline for an article said, "Compliment the Bedding."
It was, as I suspected, a piece about making matching bedroom decor so the colors would go together harmoniously, and not, as you would think from the word "compliment," a piece about giving praise to the way the bedding looks.

To complIment is to flatter, to heap praise upon. To complEment is to make something whole or complete.

In this case, there's a very fine line, but there is still a distinct difference. It was pretty funny thinking about someone coming on to bedding.

Well, ok, I'm not personally moving, but I'm moving my blog to my new author website at teresarobeson.com. Hope you'll join me there!

You can also find me in my usual blog, Raising Our Own, where I babble about a lot of different things related to my life. :)

I won't be deleting this blog since I keep track of my favorite writing/publishing bloggers here (and I may do identical posting here and on my website for a while).

Hope your week is productive!

My obsession with Little Women

Once upon a time, my parents immigrated from Hong Kong to Vancouver, British Columbia. I was 8 years old then and spoke not a lick of English.

But thanks to small class sizes and having an teacher's aide back in 1972, I was able to learn English quickly through immersion and my third grade teacher giving me extra help.

By the end of the school year, and I had even missed a couple of months of school since we moved in October, I had progressed from "Mat the Rat" to my very first novel.  Bet you can guess what the novel was. Yup: Little Women by Louisa May Alcott.

It was pure magic for me, both being able to read a novel in a foreign language and the novel itself. This is why I ended up owning 3 copies of the book.

The one in the middle is the copy I found in my parents' basement. I have no idea how they got it because the inscription inside said it belonged to one "Rosario Maria Gulelle." 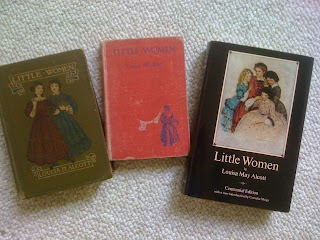 I kick myself for never asking my mom, while she was still alive, who the heck that person was. I can't ask my dad because he'd never know; he is a flake. Lovable, but a flake nonetheless.

The volume on the left might be even older than the one in the middle. It's copyrighted 1910 and belonged to hubby's maternal grandmother (she dated it 1913 in her handwriting).

Then, because I didn't own a copy of Little Men, I had to get the 3 volume anniversary edition on the right (which includes Little Women, Little Men, and Jo's Boys). HAD to. ;)

Do you own more than one copy of any book? If so, what is it?