Thanks to the urging of my amazing teacher, Michaela Roessner, from the Gotham Writers' Workshop SFII class, and the fortuitous timing of hubby's Spring Break week, I attended my first ever ICFA!

To say it was an incredible experience would be like saying that da Vinci was pretty good at drawing. I hadn't had this much fun since Europe '86, plus, bonus, I didn't have to watch for Chernobyl produce. This conference, on the awesome scale (and I do mean awe-inspiring, not the recent bastardization of the word), beats out even the SCBWI one when I met Jane Yolen or the other SCBWI one when I won a door prize.

At the ICFA, some of the über talented - and friendly - authors I got to meet include Connie Willis, Terry Bisson, James Patrick Kelly, John Kessel, Ted Chiang, F. Brett Cox, Jeanne Beckwith, Theodora Goss, and the two lovely people who took me under their wings and showed me around, Andy Duncan and his wife, Sydney Duncan.

One of the highlights was attending the Guest of Honor panel: from left to right - Andy Duncan, Andrea Hairston, Connie Willis, and Terry Bisson (not shown: a certain harmonica-playing raccoon) 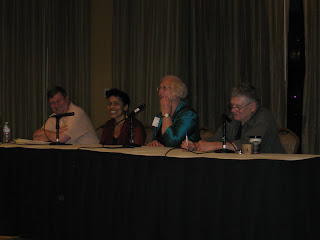 The camera's flash appeared not to have remembered to turn itself on, so I apologize for the darkness of the photo.

While I still want to go to one of the Cons one day, I'm really glad that this was the first SF conference I attended since it combines SF with academia, a setting I'm more familiar with through hubby.

But just so you don't think I'm all about SF and writing, here's a gratuitous shot of one of my favorite things: food (because, really, I'm all about food)! These are the famous UBC cheese scones; I made them yesterday for lunch, and they are perfect with the jalapeno jelly that my friend Robin gave us. 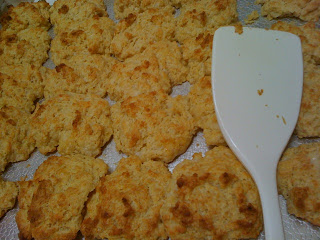