The only thing I'm pretty good at

...is, apparently, writing haiku for the birding crowd.

Continuing my winning streak at the WildBird Magazine Twitter haiku contests, I got another guide book. Yay! We love bird guidebooks (as you can see from a post on my homesteading blog), and this was one we didn't have yet.

Thank you, again, Amy (@WBeditor on Twitter) and your wonderful staff, for enjoying my 140-characters poetry! When I'm feeling down with yet another rejection, I can say that at least birders appreciate my talent. Birders are some of our favorite people anyway. ;) 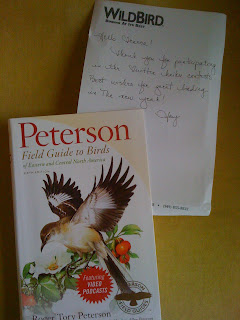 "There is no such thing in anyone's life as an unimportant day." – Alexander Woolcott
Posted by Teresa Robeson at 8:51 AM No comments:

"Hello, my name is Teresa, and I'm an introvert."

I've known for a long time that I'm an introvert. A lot of people don't believe it though since, when I'm forced to be in a group setting, I appear gregarious and un-shy. Well, guess what? I'm just faking it when I do that. Apparently, I fake out-going-ness as well as Meg Ryan fakes an orgasm in When Harry Met Sally.

There's not really a whole lot in studies published on introversion/extroversion that is news to anyone who has him or herself pegged as one or the other. Still, it's somewhat interesting to re-hash this stuff when the news cycle once again comes around to covering the topic as though it were ground-breaking.

Case in point: the recent article in Time magazine and the subsequent piece on NPR.

If you've not self-diagnosed your social bent yet, take the quiz at the link above. Even though I know what I am already, I took this one because I enjoy quizzes (yes, I'm sick that way; whenever we have to fill out questionnaires, hubby always hand them to me to deal with). It was easy...I just checked "yes" all the way down...well, maybe with the exception of "I can concentrate easily". That's not so easy at my age with a forgetful brain and a family who feels no qualms about interrupting me.

The statement that resonated most with me was:  "I prefer not to show or discuss my work with others until it's ﬁnished."

The Gotham classes and my critique groups have mostly cured me of that peculiarity, but it used to be that I would never show anyone my writing, except the editors that I submitted my writing to. I wouldn't even show them to people after they were published. Whenever friends and family asked if they could read my writing, I'd usually mumble something about, yes, they could find them in such-and-such magazine.

Except for that little bit of neurosis, though, I would not trade being an introvert for the world (especially not the world in the sorry state that it's in now). I love being by myself, the quiet, and the solitude of recharging my spirits.

So, my friends, what are you - introvert or extravert?

"There is no such thing in anyone's life as an unimportant day." – Alexander Woolcott
Posted by Teresa Robeson at 10:12 AM No comments:

One of the more fun things about writing is doing research. For shorter stories, or a quick, one time tidbit, the internet is indispensable. I really don't know how writers used to do it before the World Wide Web and search engines. They must have been slaves to the library.

I found myself looking up expensive Italian men's shoes the other day...along with demon names, and the Dutch word for "sweetheart". What, you can't see the commonality? Heh. 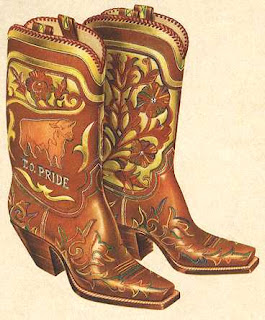 not *these* shoes
What the most unusual thing you've researched?

"There is no such thing in anyone's life as an unimportant day." – Alexander Woolcott
Posted by Teresa Robeson at 9:32 AM No comments:

I was doing some Disqus editing and ended up deleting all the comments on this blog instead. I tried to do a recovery but I think I botched it up even more.

I feel like my FIL who never learned how to program a VCR. If you ask me what a VCR is, I'm be liable to throw my 8-track player at you. :P

I guess the only thing left to do is hobble off on my walker with dignity. *sigh*

"There is no such thing in anyone's life as an unimportant day." – Alexander Woolcott
Posted by Teresa Robeson at 10:10 AM No comments: