I used to think that it was those of us who have English as a second language who mixed metaphors. Not so, I've discovered.

Within the last week, I heard/saw two prime examples. A woman in an interview on NPR said, "...struggling by the skin of my teeth...". Now, I'm not positive that this lady isn't ESL (though I was pretty certain by the context of the interview), but I thought that she may be under duress and therefore not paying attention to her metaphors.

The next one came from a letter someone wrote to my father-in-law. It said, "I'm behind the eight ball in replying...". Ummm, yeah.

Those examples really merely make me go, "huh?" But my favorite mixed metaphor comes from another ESL person - someone hubby attended grad school with. It's getting one's "sh*t in a row". Much funnier than getting "ducks together". 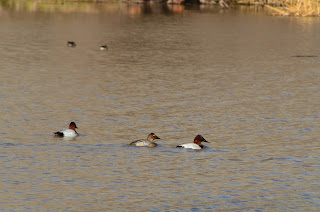 Have you ever mixed metaphors? What is your favorite or least favorite?

"There is no such thing in anyone's life as an unimportant day." – Alexander Woolcott
Posted by Teresa Robeson at 9:32 AM