So I dropped out of Facebook...it was supposed to be a temporary hiatus while I got some writing and other stuff done for deadlines, but now that I've been away for a few weeks, I don't know that I want to go back. I've not had the yen to go back. I'm not even the least bit curious as to what people are doing.

I'm also on Twitter but because I don't find that it distracts me as much as Facebook did, I didn't bother to suspend that account while I was on a time crunch.

Because I'm not as fussy as to whom I friend on Twitter as I am on Facebook, I find that after a while, I have too much stuff in my "stream". While I use Tweetdeck (because Kristen Lamb told us we had to) to keep track of people whose tweets I most want to see, I still feel swamped. And that's where Friend or Follow comes in.

I know Twitter has hiccups where it un-follows people randomly for you, but sometimes, for whatever bizarre reason, people will follow you, wait for you to follow them back and then un-follow you. Weird.

So to weed out people like that, you can use the nifty tool called Friend or Follow to find out who got you to follow them and then stopped following you. It's a great decluttering tool...and it's free! I like to use it about once a month or once every couple of months to clean up my Twitter account.

Thanks, @Randy_Gage for creating Friend or Follow! You've made cleaning up easy on Twitter. Now if you could invent something similar to deal with the rest of my house, especially the junk drawer...

Have you used FoF before? Are you as enamored by it as I am?

"There is no such thing in anyone's life as an unimportant day." – Alexander Woolcott
Posted by Teresa Robeson at 11:05 AM No comments:

One of my resolutions for this year was to do a quick bird sketch each day, using an old bird-a-day calendar by David Sibley that someone passed along to us. That lasted a whopping couple of months. Even at just 5 minutes a sketch, I couldn't squeeze the time in to that on a daily basis. Pretty pathetic, I know.

But despite my failure to keep it going, I was happy enough with some of the sketches I managed to do, so I thought I'd show you a few of them. Click on the images to enlarge. 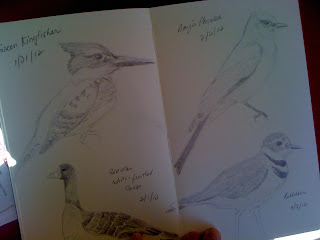 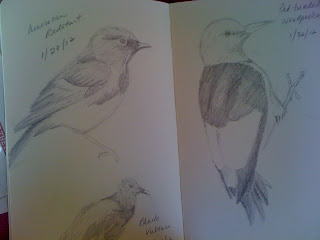 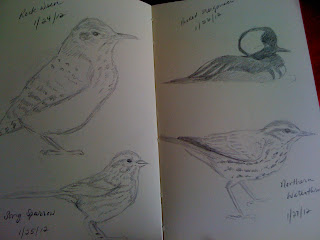 And, yes, dear Michelle, I AM actually still thinking about the wolf art I promised you...although you may not find yourself with the same wall space in your dream homestead, and we may have to plan for a different size. :)

"There is no such thing in anyone's life as an unimportant day." – Alexander Woolcott
Posted by Teresa Robeson at 2:00 PM No comments:

Oh never mind. What I want to talk about is CONSOLIDATION.

This blog doesn't get a whole lot of traffic. My other blog, the homesteading blog that I started about 7 years ago, gets ten times the amount of traffic. I know this blog is young, and it will one day stop crawling and learn how to walk and run. But I don't know that I have the patience to wait.

Besides, writing two blogs takes twice - count 'em - as much energy. My AARP membership is in sight; I don't have that kind of energy anymore.

Besides, wouldn't the four of you who actually visit this blog rather read about our gardening 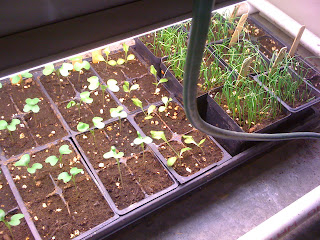 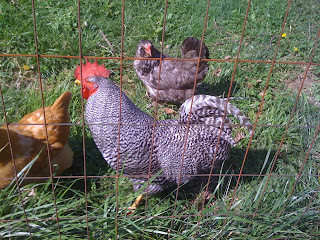 or my latest non-writing-related creative projects? 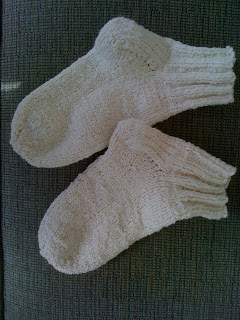 Anyway, it's something I'm considering seriously, so be forewarned. Heeey, I can hear that yawn from here.

"There is no such thing in anyone's life as an unimportant day." – Alexander Woolcott
Posted by Teresa Robeson at 9:07 AM No comments:

Email ThisBlogThis!Share to TwitterShare to FacebookShare to Pinterest
Labels: consolidating

Worried about my brain

This past week, I received a book in the mail: Confessions of a Closet Catholic by Sarah Darer Littman. 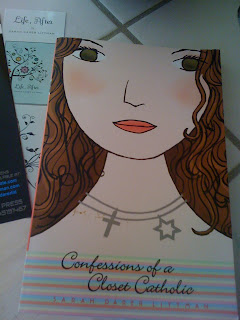 It looks like a fun and funny read...but I have no idea how I got it. I don't recall signing up for a giveaway or winning any contests. Hubby thought someone I know might have sent it to me, but it came from, and was signed by, Ms. Littman herself.

Regardless of how I got it, thank you so much Sarah for the book! And, if anyone knows I came to receive it, or has come across my brain wandering aimlessly down a sleazy back alley, please, please, please tell me.

"There is no such thing in anyone's life as an unimportant day." – Alexander Woolcott
Posted by Teresa Robeson at 9:16 AM No comments:

Email ThisBlogThis!Share to TwitterShare to FacebookShare to Pinterest
Labels: Confessions of a Closet Catholic

I've been tagged by John Rea-Hedrick over at his blog R-H Perspect!ves to play The 7 Game. I'd not done a meme in a while and since this doesn't require extra work on my part, I was happy to play along. ;)

Go to page 77 of your current MS.
Go to line 7.
Copy down the next seven lines or sentences and paste them as they’re written.
Tag seven other writers to play the game.

The following is a snippet from a SF-comedy novel I wrote for the 2009 NaNoWriMo.

“Well, then you can keep watch and make yourself useful somehow. Just don’t touch anything without consulting with us.”

“And don’t play chess with the computer,” said Wendy. “It cheats.”

“I do not cheat,” said the computer.

I rarely tag anyone in memes and this is no exception. However, I'd be delighted if you played along! Please comment below so I can go read your entry if you decide to play. :)

"There is no such thing in anyone's life as an unimportant day." – Alexander Woolcott
Posted by Teresa Robeson at 9:02 AM No comments: